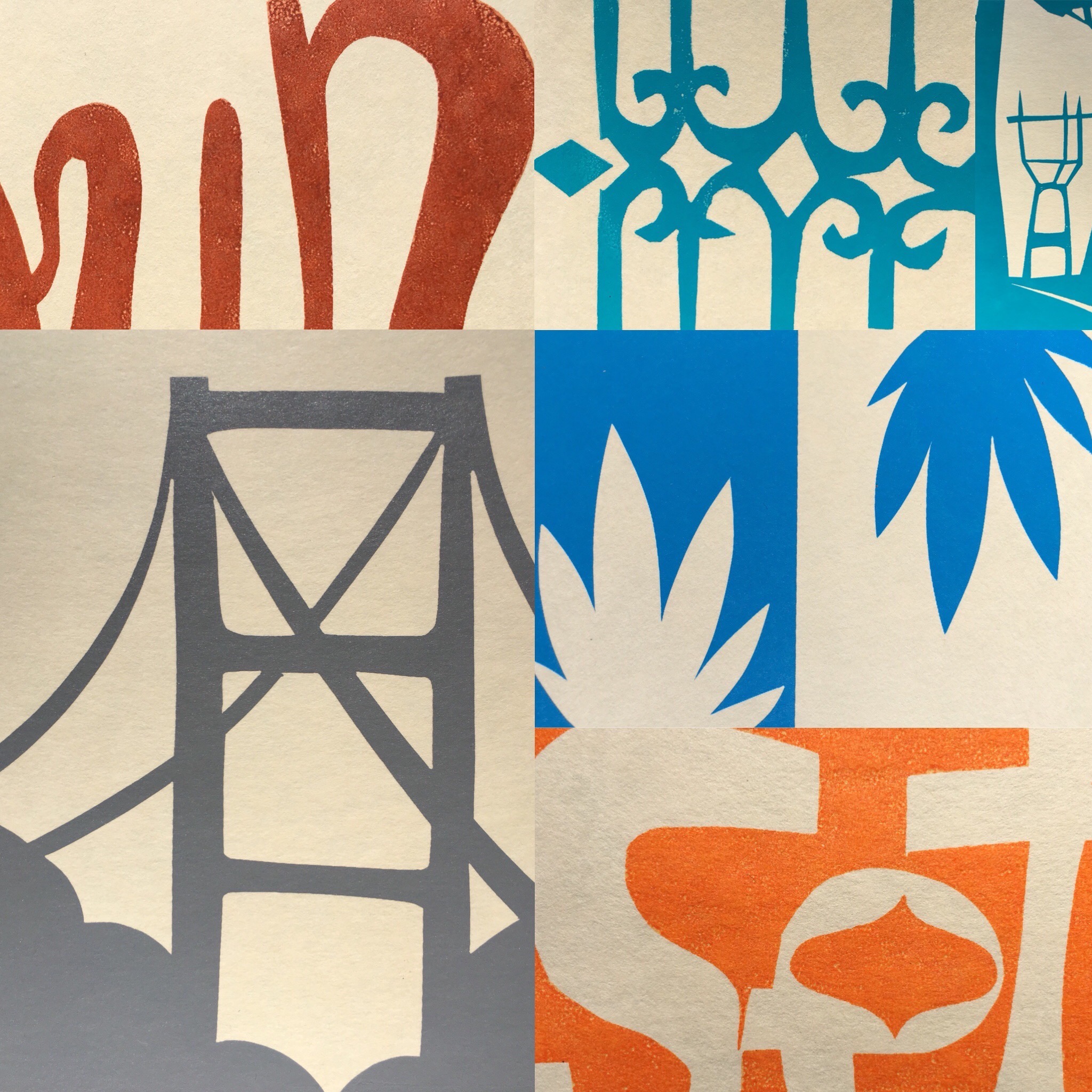 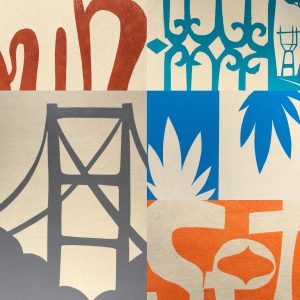 Sunset Elements: to express essential characteristics of life and place. Distillations of both the universal and particular. Hand drawn, hand painted, and silkscreened. Cut up and put together.

Two artists from Santa Cruz blending designs, sharing views and interpretations of our surroundings from on site seeing, sketching, and scribbling while traveling through and being in the City and along the coast. Recognizing and acknowledging wild natural elements which surround and flow through the urban environment, what we consider real worlds amidst the human built world.

Two heads and two hearts, two sets of eyes and ideas expand the visions and possibilities. The whole feels greater than the sum of the parts. The urban world has its own magic. Especially San Fransisco! This City, surrounded by water from the bay through the Gate to the deep sea. The hills and vistas and parks and trees and neighborhoods and gardens and rich human culture and history. The dynamic weather and micro climates. Magic! Even more so when we see and feel the elements within and all around us which sustain this City and all life. Sun, soil, water, air, atmospherics, color, texture, beauty, always in endless transformation.

Dave Gardner Artist, writer, surf fiend, skateboarder, crude musician. Inspired early by immersion in sea, sand, and sky, as well as soil and concrete. On a mission to translate much wild life into human language on scales sliding from post cards to the sides of buildings. Author and illustrator of The Adventures of the Salty Little Sliders. As interested in growing and eating food as anything else. 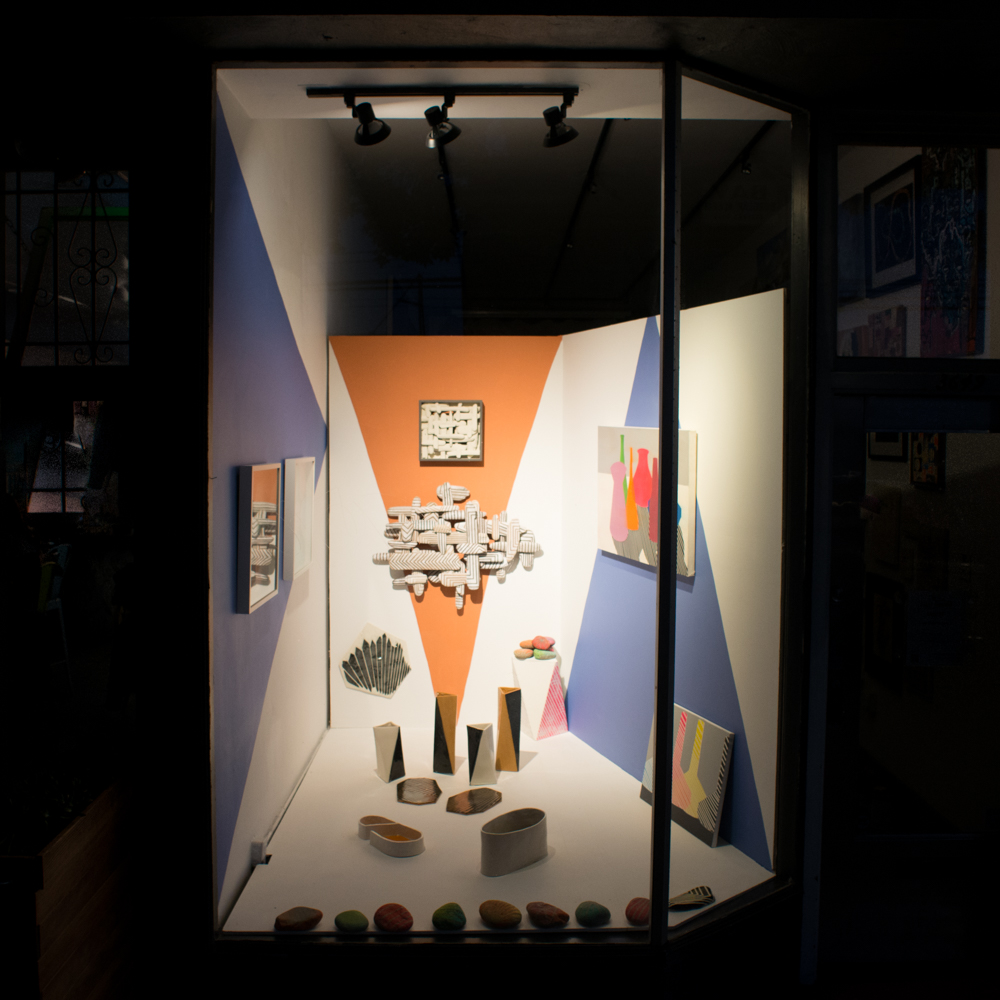 Zoloft in the Fog 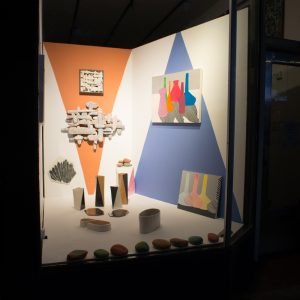 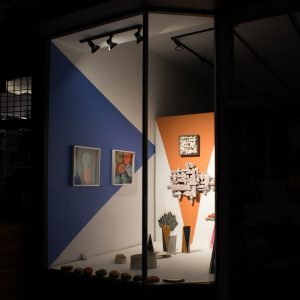 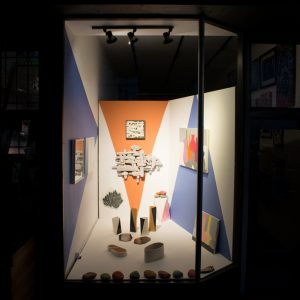 Artist Linkshttp://www.leobersamina.com/
instagram  @leob50
The Great Highway Gallery is happy to present Zoloft in the Fog, installation, paintings, ceramics and print editions by Leo Bersamina.
About the Artist
Leo Bersamina was born in San Francisco, California and grew up surfing and fishing on the coast, just south of the city. Early on, Bersamina began studying art and design in Santa Cruz, California. Later he attended San Francisco State University to finish his BA with an emphasis in Studio Art. He received an MFA in Painting at Yale School of Art in New Haven, Connecticut.
Upon graduation from Yale, Bersamina lived in New York City until he returned to California to teach Studio Art at UC Berkeley. Along with his studio practice, Bersamina has also taught Studio Art at Yale, Stanford, Pont-Aven School of Contemporary Art, Santa Rosa Junior College, and Diablo Valley College (where he currently is a tenured instructor). Bersamina continues to exhibit nationally and internationally, and currently resides just north of San Francisco. Leo is showing courtesy of Anglim Gilbert Gallery.
Artist Statement
For this show I have collaborated with ceramicist Karl McDade to create sculptural ceramic works that are made to feel good in your hands, invite you to touch and hold, and to use in your life. The work is supposed to put a smile on your face and to show the process of its creation. It is work that samples the Northern California landscape and lifestyle, while having roots in modernist forms and pattern.
Possible Side Effects
Happiness, smiling, mindfulness, kindess, civility, good nights sleep, thoughts of helping others, overall relaxed mood or a decrease in reading news.
About the Gallery
The Great Highway is a fine art gallery located in San Francisco’s Outer Sunset district. The gallery was founded by John Lindsey, a long time resident of the city with a deep appreciation for images and ideas that explore the intersection of land and water in contemporary work. The Great Highway Gallery’s mission is to seek, analyze, support, and promote the work of a diverse group of artists who seek sincere authenticity, challenge conventional thinking, amuse us, and push the boundaries of today’s creative media. To learn more about the gallery, visit www.thegreathighway.com.
The Great Highway 3649 Lawton St
San Francisco, CA 94122
thegreathighway.com@thegreathighway
Press ContactJohn Lindsey 
info@thegreathighway.com 
+1(415) 680-3891 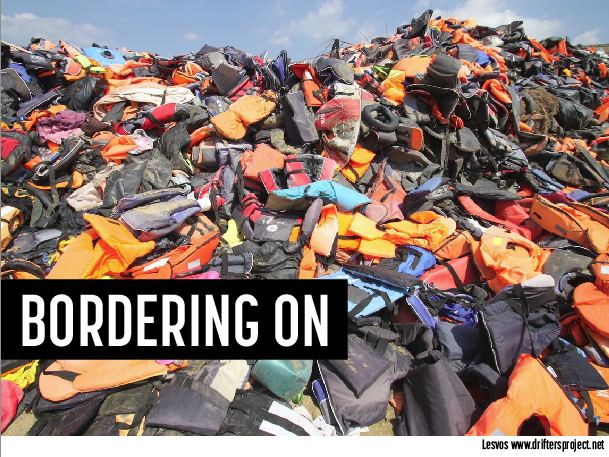 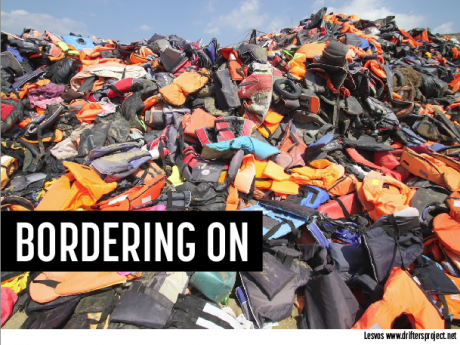