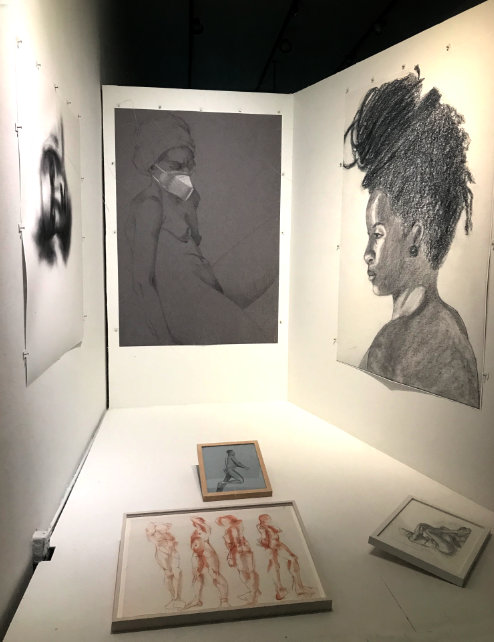 Your Turn To Look

The Great Highway Gallery is excited to present Your Turn To Look a group exhibition, of a San Francisco based drawing group that has been together for over 40 years. The exhibition features: a window installation and drawings.

Exhibit Statement
We rarely get to regard another person in an extended, curious, active way. That is special. It keeps artists coming back, week after week, year after year, to draw from a model for hours at a time. Outside of this time, we use drawing in different ways—our group includes painters of landscapes and painters of abstractions, sculptors, printmakers, and new media artists. But all of us find the continual practice of life drawing helps us do what we want to do as artists.

Our group has been meeting regularly to draw from a model since 1979, when Meredith Tromble scored a storefront studio in Noe Valley that was big enough to host a group. The artists William Theophilus Brown and Paul Wonner, Noe Valley neighbors, joined in and brought Jessica Dunne into the group. We have persisted for over forty years, through multiple studio evictions, the passing of Bill and Paul, and the coming and going of other colleagues. Our current home is Dunne’s studio near the Great Highway.

Like most long-term drawing groups, we have our own culture. We play music but we don’t talk while we are drawing. If the model is late, we start by drawing each other. There is tea but no food. We never, ever criticize each other’s drawings. We are there to tunnel through whatever is on our mind to a deeply focused awareness, the flow that connects what we see and what we do. The results of this process hang here. It is your turn to look.

Marc Duffett
Drawing and painting have always been at the core of my sense of self. Painting expresses dreams and energies for me, while drawing anchors me in the physical act of seeing. In the sixties I fell in love with life drawing at RISD, and Jessica Dunne’s drawing group has allowed me to continue this passion.

Jessica Dunne
Jessica Dunne makes enormous paintings of the Bay Area’s tunnels, freeways, and schoolyards as well as smaller atmospheric monotypes and spit-bite aquatints. She lives in San Francisco when she is not off being an artist-in-residence somewhere. A recipient of the Pollock-Krasner Foundation Grant and a Kala Art Institute Fellowship, she has had solo shows in museums and universities around the country, including the Fresno Art Museum, The Flaten Art Museum, Saint Olaf College, and the Frye Art Museum.

Her work is collected by the Oakland Museum of California, the Fine Arts Museums of San Francisco, and The Library of Congress, and Stanford Special Collections.
https://www.jessicadunne.com
Instagram: @jessicadunnepaint

Joan Frenkel
I was the Head Sculptor of the San Francisco Opera and of the San Francisco Ballet for over thirty-five years. I sculpted everything from props, statues, and prancing ponies to palaces and mountains. Sculpted large porcelain seashells and low relief tile murals. My work mostly involves painting and cutting paper sculpture mounted in shadow boxes. I received degress from Washington University, St. Louis, MO and the San Francisco Art Institute.

Grace B. Kennedy
“Grace Kennedy has been a member of this drawing group since 2008, around age thirteen. She is a graduate of the Pennsylvania Academy of the Fine Arts in Philadelphia, as well as the University of Pennsylvania. She has shown at the Pafa Museum in Philadelphia, C.R. Ettinger Studio, and the DeYoung Museum in San Francisco.”
http://www.graceart.space/
Instagram @gray_sea23

Olivia Kuser
I’ve been drawing since I was a little girl, but I didn’t draw from the model until my senior year in college, when I took a studio art course as a respite from writing my thesis. What a revelation, both in how hard it was and how fun it was.

Since then, I have looked for opportunities to draw from the model whenever I could. My work isn’t figurative; I’m mostly a landscape painter and printmaker, so drawing from the model doesn’t directly inform my work. It’s great for hand-eye coordination and for learning how to see. Also, since most art making is a completely solitary activity, drawing groups provide a chance to work communally with other artists. I’ve been in this drawing group since sometime in the late eighties or so. Since the pandemic began we have managed to meet only three times, outside, everybody masked, and when the numbers looked ok in the city. This is a drawing from one of those sessions.
http://www.oliviakuser.com

Amy Meyer
When I was a child in Brooklyn, N.Y. I loved to draw. In high school, I took after-school art classes at the Brooklyn Museum and the Art Students League. My interest evolved into a passion continued at Oberlin College where I earned a degree in art and art history. I came back to New York and pursued hopes for a career in art. I earned my MFA in printmaking at the California College of Arts and Crafts (today, CCA) and we raised our family, but I eventually put aside my art work. In 1970, I began looking for a small community project to become involved in and stumbled into the biggest land protection effort in our region: the Golden Gate National Recreation Area (GGNRA). For fourteen years I thought of little else except my family and this open space while conservationist Edgar Wayburn and I led People for a Golden Gate National Recreation Area.
https://www.amywmeyer.com

Anne Subercaseaux
I worked in architectural and engineering firms, initially as a draftsperson and later as a graphic designer, places of work that had a prolonged personal influence. I began to observe and study sights, those which I encountered within urban and natural settings. Commutes over the San Francisco/Oakland Bay Bridge presented a spectrum of structural configurations cast by afternoon light onto the surface of the roadway span.
http://www.annesubercaseaux.com

Tara Sullivan
The pairing of art & medicine has been my path, with a lifelong interest in studying the figure for the visual discipline required. The ability to accurately see and assess is vital for both disciplines. I’m drawn to short, quick poses for the challenge of capturing the essence, the essential-ness of being. Receiving a BFA from the University of Hawaii led to being the founding director of an art studio program at the Rehabilitation Hospital of the Pacific in Honolulu. I currently live in San Francisco, my home of origin, in the outer Parkside after 30 years in Hawaii, and am inspired by the Bay Area Figurative artists.

Meredith Tromble
Meredith Tromble is an intermedia artist and writer whose curiosity about links between imagination and knowledge led her to form collaborations with scientists in addition to making installations, drawings, and performances. Since 2011, Tromble has been artist-in-residence at the Complexity Sciences Center directed by physicist Jim Crutchfield at the University of California, Davis, collaborating with geobiologist Dawn Sumner and others. Her work has been widely presented at venues ranging from the Yerba Buena Center for the Arts, San Francisco and National Academy of Sciences, Washington, D.C. to BioBAT Art Space, Brooklyn. She is also the editor of two books, The Routledge Companion to Biology in Art and Architecture, co-edited with Charissa Terranova, and The Art and Films of Lynn Hershman, University of California Press. She is co-editor of the Bloomsbury book series “Biotechne: Interthinking Art, Science, and Design” and a Professor of Interdisciplinary Studies/Art & Technology at the San Francisco Art Institute.
https://meredithtromble.net

Hours:
By appointment 7 days a week