Through August 11 on our Main Wall

The Ship that Found Herself
We now, held in captivity,
Spring to our bondage nor grieve–
See now, how it is blesseder,
Brothers, to give than receive!
Keep trust, wherefore we were made,
Paying the debt that we owe;
For a clean thrust, and the shear of the blade,
Will carry us where would go.
– Rudyard Kipling

Curator’s Statement
Christian Spruell: Ship, VI, VIII, VIIII, XII are selected works from a series of paintings completed in 2017. In 2018, Spruell invited me to his studio to see his current body of work prior to completion. During my visit, a small, framed painting of a ship caught my attention. When I asked, “Who made that one?” he shyly responded, “Oh I did, but it’s not meant for the public”. He then proceeded to unveil the other Ship paintings, all professionally framed and bubble wrapped. I was in studio visit bliss; I knew I was one of the very few who had viewed these pieces. I thought to myself, he knows that they are not studies but rather completed works, which explained the fact that they were frame I spent time viewing them, gazing at them, wondering how they had landed at Christian’s studio. During the drive back to my office, memories of my time living in Ocean Beach in the late 1990’s surfaced like the sunken shipwrecks of King Philip… near Noriega Street… Ship, VI, VIII, VIIII, XII will be the first time the public will have the opportunity to view selections of this body of work.

Artist Statement
AN AGITATION OF NORMALCY
contrasting applications is a reoccurring element of my work. Meticulous processes are underscored with painterly applications. These contrasting applications are a reoccurring element of my work and are commonly found in my craft both in mark making and in material. Subject matter varies from series to series. Whether figurative, still life, landscape or abstraction I approach the canvas with a consistent and honest philosophy to embrace the vile and repugnant with the same welcoming that is received by the elegant magnetism of beauty and that by engaging in this celebrated disturbance, a reflection of the human condition will occur. An agitation of normalcy in this peaceful fracas is what I hope to harness within the gaze of the viewer. As an artist I feel that it is my charge to create a depiction that is sincere. To quote Georg Baselitz, “The painting fights for its own life” and therefore as a painter, my knife and my brush must be genuine. 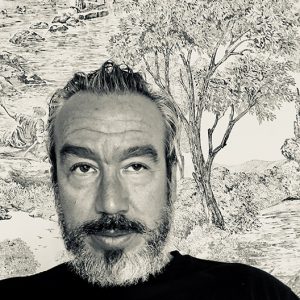 Christian Spruell is an American painter. He has exhibited Nationally notable exhibition in New York, Denver, and Los Angeles. He attended the San Francisco Art Institute and is an Alumni of the Skowhegan artist residency program. He currently lives and works in Southern California.